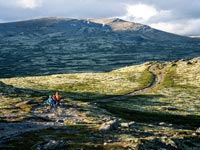 What is Trail Running?

Trail running is, as the name implies, simply running on trails, as opposed to Road running, which is running on roads/ paved surfaces.

Trail running often involves uneven ground and maybe stones, roots or even holes along the paths. It often requires more concentration on where you put your feet compared to running on roads.

Trail running offers the advantage of being able to run in natural settings and through beautiful scenery.

What is Mountain Running?

Mountain running is simply running in the mountains!

However, it also in most cases offers beautiful views as a reward for your hard work!

What is Fell Running?

Fell running is running on steep, uneven ground in a natural setting where there often are no paths or trails to follow, in much rougher terrain than trail running. For fell running, the gradient climbed is a major factor in the difficulty.

It is just to run where you want to go. It’s similar to orienteering in that you don’t necessarily need to follow a trail or a path to get to your goal, you just run through all sorts of terrain.

Fell running may include bogs and easy scrambling, as well as forest or meadows, but will always have hills as a central component. For a fell running race, participants will be expected to have mountain navigation skills and carry suitable safety equipment.

So, What’s the Difference?

Nature Travels offers a variety of options for Trail Running and Mountain Running tours. We don’t yet offer Fell Running, but we might!