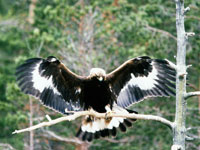 The Golden Eagle, Aquila chrysaetos, is Sweden’s second largest bird of prey, the largest being the White-tailed Sea Eagle. It has a body length of almost a metre and a wingspan of well over two metres, making the Golden Eagle considerably larger than the more commonly-seen buzzard.

Found throughout the country, Golden Eagles are most common in the north of Sweden. They are shy birds and prefer to keep to unpopulated and undisturbed areas. However, they may come nearer to built-up areas in order to take advantage of carrion found on roads or in gardens.

Known as the “Kungsörn”, the King’s Eagle, in Sweden, Golden Eagles are skilful hunters which patrol their territory flying low in an attempt to surprise and flush out their prey.

They may also be spotted sitting motionless, scanning the landscape for something to eat, or soaring high up in the sky with their wings outstretched in a characteristic “V” shape. Golden Eagles usually take their prey on the ground, but may also pursue birds in flight to bring them down.

Golden Eagles have varied tastes, and their diet will depend on what is available in the local area. They are as likely to take rodents as birds, and in winter, when food is scarce, may also eat carrion to see them through this difficult period. With their exceptionally powerful talons, Golden Eagles are capable of hunting larger animals, too, such as young deer and reindeer and fully-grown foxes. They may also combine their talents to hunt in pairs.

Adult Golden Eagles have a dark plumage, while younger birds have light feathers on their wings and a lighter tail with dark tip. Birds of all ages have a yellow or light reddish-brown colouring on the neck.

Golden Eagles mate for life. They build their eyries most often in old-growth pine trees, and in the north of Sweden prefer these trees to be more than 250 years old! These large nests may also be found on steep cliffs.

Golden Eagles normally have a number of nests which are used alternately over a period of many years. They may not breed every year, but during the breeding season these always elusive birds may be even shyer than usual.

Normally, the female will lay two eggs, and Golden Eagles in Sweden have an average success rate of 0.5 young raised per year. Generally, the older chick will take most of the food and as a result the younger chick often dies before leaving the nest.

In Skåne in the south, on the island of Gotland and in the region of Härjedalen, the rate of success is higher, perhaps due to the increased abundance of prey. Golden Eagles may live to reach 50 years of age.

The Golden Eagle is under threat from a number of sides. Forestry activity in old-growth forests, the construction of new forest roads and tracks, snowmobile traffic through breeding areas, and the increased recreational use of previously undisturbed tracts of land have all contributed to the decline of the Golden Eagle in Sweden.

Another more recent threat is an increase in hunting pressure in the mountain areas on the ptarmigan, one of the Golden Eagle’s key prey species. Through the analysis of dead birds, a number of other threats have also been identified, including significant casualties from trains and power lines.

Ongoing efforts are being made to halt and reverse the decline of the Golden Eagle, but since Sweden’s entry into the European Union, previous feeding programmes in which animal carcasses were left out as food to support local eagle populations have suffered due to strict EU regulations.

There are currently around 1000 adult Golden Eagles in Sweden. In the north, the population appears to be declining, while in the southern parts of the country the reverse seems to be the case. Overall, the population is thought to be more or less constant.

Despite the many threats faced by Golden Eagles, we fervently hope that through increased understanding of the problems and greater public awareness of the need to protect and conserve these beautiful and majestic birds, the wild places of Sweden will echo to the cries of the Golden Eagle for many generations to come.

The sight of a Golden Eagle is a wildlife experience you will not easily forget, and the Nature Travels team was fortunate enough to have some superb views of a Golden Eagle feasting on its freshly-caught prey of fish on the ice of a frozen lake during a visit to the Bergslagen area some time ago.

In the company of Marcus, who runs our Moose and Beaver Safari plus Wolf Howling Tour, and local bird expert Daniel, we spent a memorable afternoon birding, of which our Golden Eagle sighting was definitely the highlight. An exceptional wildlife encounter that will stay with us forever!

Nature Travels offers a wide range of outdoor holidays in Sweden in areas where Golden Eagles may be seen, including Canoe Tours in Bergslagen.