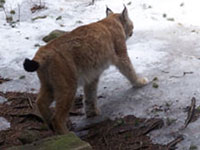 The lynx is Europe’s largest wild feline – the ”tiger of the north”! In Sweden, the lynx is the third most common large predator. Population estimates vary, but out of a total Scandinavian population of around 2000, approximately 1500 are thought to live in Sweden. Second is the brown bear. Top of the list? Humans of course!

Despite the fact that lynx roam over an extremely wide territory, there are relatively few people in Sweden who have ever seen one in the wild. Lynx are shy and elusive creatures. However, slowly but surely, lynx populations have begun to increase and the distribution of the species across the country is widening. Hopefully, more and more people in Sweden will one day have the opportunity to see this beautiful and majestic animal in its natural habitat.

Lynx are currently found in many areas of Sweden, especially in the northern and central regions. The lynx is now once again expanding its territory southward to colonise its former homelands in the counties of Småland, Halland, Västergötland, Sörmland, Uppland and Östergötland.

Are lynx dangerous to humans?

Olof Liberg, a researcher responsible for lynx research in Sweden, has this story to tell: “Over a period of years we have regularly been in areas where adult lynx females have had cubs, without the lynx attacking us. In these circumstances the mother can be extremely fearless and aggressive, growling and pacing back and forth just 10 metres away. It is hard to imagine a more provocational situation for a lynx, and despite this the animal did not attack, which should be convincing proof that lynx are totally harmless to humans.”

Robert Franzén, of the Swedish Environmental Protection Agency, says, “There have been number of tales of lynx attacks, but no documented cases, since lynx keep themselves at a distance if not directly attacked.”

A lynx paw makes a clear round print if compared to a canine track, which is more oval. Lynx tracks are often mistaken for wolves. A sure way to tell is to look at the relationship between the pads. In clear lynx tracks one can see that the toes lie asymetrically, that is to say they project different distances forward. Lynx tracks are usually 7-10cm in size, with the front paws being somewhat larger than the back.

With a little luck you may hear lynx calling to each other during the mating season, especially during March and April, though sometimes also in January. The calls come in a series of twenty to thirty hooting sounds not unlike an owl, beginning weak but becoming louder. While running the female may also cry out like a fox to maintain contact with a partner.

On the whole lynx are generally quiet animals, but may growl when angry. They may also produce mewling sounds like a domestic cat when afraid. Mothers communicate with cubs by means of birdlike piping sounds. Both young and old lynx also purr just like domestic cats.

The Future of the Lynx in Sweden

While populations are increasing and expanding slowly in Sweden, not everyone is on the side of the lynx. With careful conservation and improved understanding of this wonderful predator, we very much hope that the future of the lynx in Sweden will be a bright one!

Nature Travels offers a variety of wildlife and outdoor holidays in Sweden, many of which take place in lynx strongholds.