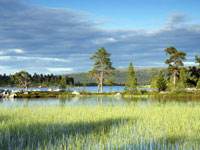 The Rogen Nature Reserve is an area of wilderness in north-west Sweden, bordering Norway where it is contiguous with the Femundsmarka National Park. As well as being famed for its excellent fishing, Rogen is one of Sweden’s top areas for canoe tours, ideal for those looking for a real wilderness paddling experience. The article below describes Bob from the Nature Travels team’s experience of our Discover Wilderness Canoeing in Rogen self-guided canoe tour (5-8 or more days). A longer and more challenging canoe tour in the Rogen area, Rogen Wilderness Canoe Expedition (8-14 or more days) is also available.

Together with three friends from Scotland (Adam, Craig and Euan our official photographer for the trip), I spent six days paddling in the area in mid-June 2011 – six glorious days of fresh air, clear water and stunning views, all served up with a healthy dose of boys’ trip cameraderie, and of course the occasional mosquito!

The night train from Stockholm disgorged us blinking into the morning sunshine at Östersund at a most uncivilised 6am. Fortunately the station staff is used to early morning passengers and the kiosk already had the coffee machine on and cinnamon rolls baking in the oven. This, plus the fact that it was midsummer when sleep feels like a shameful waste of daylight, meant that we were relatively awake and ready for action.

A couple of hours later and we were the only passengers on the bus to the wild and woolly outreaches of Funäsdalen, chatting to the driver about the local sights and his passion for Scottish whisky.

Euan got very excited when we stopped for a rest break near an outdoor store – he disappeared inside and emerged five minutes later proudly clutching a full-length net mosquito jacket, which he’d always wanted for those Scottish hillwalking trips but couldn’t find at home.

I’d visited the area a number of times in winter, but this was my first time in Funäsdalen, and it turned out to be a perfect jumping off point for the outdoor activities in the area.

We had an instruction meeting with Kalle from the canoe centre, who advised us sagely to “take it easy”, especially when making land transports – wise words, as even a simple twisted ankle can be very serious in such a remote area.

A question often asked by clients considering a tour in Rogen is “How far will we paddle each day?”, but in Rogen this question has little meaning.

Depending on the particular area of the reserve you are exploring and other factors such as the terrain, wind and weather conditions, as well as of course your own energy levels day-to-day, you could find that you munch through the miles with a full day’s paddling, cover just a handful of kilometres on a day requiring a challenging land transport, or decide to take a day or more off the water completely to climb one of the peaks for an unparalleled view over the surrounding wilderness.

Kalle was right – “take it easy” and you will have a more enjoyable, safer and more rewarding experience than if you focus on setting too many goals for your trip.

We dropped our bags at the canoe centre and headed for the supermarket to stock up. Unexpectedly, we were spoiled for choice and it took us rather longer than expected to negotiate a menu we were all happy with, but after quick repack we were ready for the off, rattling our way out of Funäsdalen along gravel forest roads to the start point.

With a cheery wave, Kalle disappeared in a cloud of dust, our last sight of civilisation for the next week. The silence closed in around us and we gazed out across the water for the first time with a mixture of great excitement and just a flutter of trepidation.

We were going to start the tour at Käringsjön ending at Käringsjövallen, which would take us at minimum through a series of small, interconnected lakes, out into the large lake of Rogen itself, and through another labyrinth of smaller lakes to the pick-up point six days later. How much further we would get would depend on the weather and our own inclination.

For our first day, we paddled in light rain through a beautiful maze of quiet, forest fringed lakes with some short land transports connecting them.

The edges of the reserve are particularly good fishing waters, and occasionally we would spot a local sat quietly in his rowing boat and staring into the middle distance, contemplating the greater mysteries of life as only a lone fisherman can.

Land transports in Rogen are a challenging business. The more commonly used transport points between the lakes do have basic paths worn by previous paddlers, but the terrain can be steep and rocky and at times it feels more like you are climbing with the canoe than walking with it.

In these early days before our canoe carrying technique had been honed to perfection, we did each transport twice, once with the canoes balanced on our shoulders (advantage: efficient weight bearing; disadvantage: limited visibility, leading to increased likelihood of walking into a tree!) and once with our gear.

By the end of the trip, we had developed shoulders of Kevlar and calf muscles of steel and managed most of the land transports with gear and canoe combined.

Camping in Rogen is possible anywhere, but fires are permitted only at the designated wind shelters, where wood is provided for your use and is the only wood that should be used for fire making.

The forests of Rogen are ancient and rates of decay very slow. A beautiful knarled tree stump or log you see lying on the ground may be hundreds of years old, and such rich natural heritage simply does not deserve to be turned into firewood.

In places when travelling through the reserve you will come across the remnants of fireplaces made by visitors who have not observed the rules – please do not use these for your own fires, or even better, dismantle them where you find them and remove any traces of the fireplace to discourage others and preserve the pristine nature of the reserve.

Over the next few days we explored a good portion of the Swedish side of the reserve and generally had an utterly wonderful time.

We had our fair share of sunshine, and when the clouds parted and the sun streamed down onto the water and the forest the effect was magical. We crossed over the wide expanse of Lake Rogen (choosing our timing and crossing point carefully for safety) to find our “paradise campsite” for the trip near Bredasjön, a lovely spot which opened magically before us as the reeds parted and where we could have stayed forever.

We frightened ourselves silly one day trying to round a peninsula at the northern end of the lake during a particularly choppy spell before common sense took over and we made for land and carried the canoes to calmer waters.

We took time off from paddling to climb one of the many peaks for a stunning 360-degree view over the surrounding middle-earth-like wilderness and across the border into Norway.

We battled early-season mosquitoes for the night at one particularly marshy camping spot and had a real “Cast Away” moment (the Tom Hanks one, not Oliver Reed/Amanda Donohoe!) next morning trying to paddle out from the bay but getting washed back repeatedly by the waves.

And through it all we quietly bonded during our daily ups and downs of energy levels and mood, each of us fulfilling the roles that came naturally to us – Euan producing fantastic meals to lift the spirits conjured from a single pot using the humblest of ingredients; Craig, our tea and coffee guru, producing mysterious packets from the depths of his rucksack and concocting a succession of heavenly brews just when they were needed; Adam demonstrating intellectual superiority at the Guardian cryptic crossword and waxing lyrical on everything from music to psychology, and me, well, I mostly admired the scenery and did the washing up.

Navigating on the water can be tricky at the best of times and in an area like Rogen can be very tricky indeed, especially in the more maze-like lake areas.

One headland can look very much like another, a gap could be a space between islands or just an inlet, and it’s essential to be constantly monitoring your position to make sure where you think you are and where you actually are is the same thing!

Navigation in Rogen is like the essential rule for DIY – “measure twice, cut once”. Amazingly, we managed to make reality and expectation match up pretty much all of the time, apart from a brief episode on the last day when with great reluctance we resorted to turning on the GPS for the definitive answer.

Finally, after a period which in some ways felt like years and in others like the merest heartbeat, we emerged from the depths of the Swedish wilderness like Livingstone from the African rainforest to wait for our pick-up.

Our saviour, Jan, arrived to rescue us right on time and we bumped our way home, slightly shell-shocked at the sight of tarmac roads and streetlights.

Another bus and night train journey later and we were back in Stockholm, hugging our goodbyes at the airport – hairier, muddier and undoubtedly smellier than we had been a week before (apologies to the poor unknown souls who had to share a plane with the other three on the flight home – I was off to the Stockholm Archipelago for a few days and a hot shower), but with a song in our hearts.

Bob from The Nature Travels Team