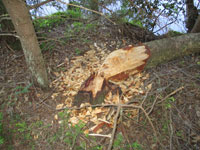 The busy beaver has come back from the brink and numbers are now increasing. Here’s our guide to beaver facts and where to see them!

Beavers can now be found in many parts of Sweden, Finland and Norway.

However, this wasn’t always the case. During the latter part of the 19th century, the Eurasian beaver became extinct in Sweden and Finland, mostly due to overhunting (as well as deforestation and grazing, which reduced their range), with only a small population remaining in Norway.

In a bid to reintroduce beavers to Sweden, 80 individuals were brought over from Norway between 1922 and 1939.

In Finland, 17 Eurasian beavers were reintroduced from Norway as well as 7 north American beavers.

Since their reintroduction, beaver numbers in Sweden have increased greatly and there are now thought to be around 150,000 individuals living in Sweden. The population in Norway is thought to have risen to around 70,000 beavers.

In Finland, the North American beaver has been more successful than Eurasian beaver, despite fewer of them being introduced into the country.

The Eurasian beavers and the North American beavers’ habitats in Finland are mostly separate, but there are small areas in the south west of Finland, where they live side by side.

There is a worry that if the North American beaver were to encroach on the Eurasian beavers’ habitat, they would out-compete them, which could result in a reduction in Eurasian beaver numbers.

Living side by side with beavers

Whilst some people are very happy that the beaver populations have bounced back at such a rate,for other people the beaver’s success has become a bit of a nuisance.

Beavers change the environment they live in by building dams and flooding areas to make slow-flowing areas of water to build their lodges in.

For some animals the beavers’ work is beneficial, but for landowners, finding part of your property flooded can be an unpleasant surprise.

The beaver’s habit of gnawing on trees can also cause problems in built-up areas, by weakening trees which are then at risk of falling down in strong winds.

Where to spot beavers

Beavers (or signs of them) can be seen across large areas of Sweden and in a number of areas in Finland.

Nature Travels offers a wide range of activities where, if you are lucky, you may see beavers in the wild: