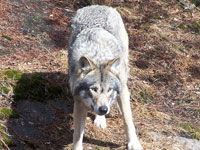 After centuries of persecution, the wolf was finally driven to extinction in Sweden in the 1970s. But, for this most resilient and wild-spirited of animals its Swedish story was not over, and in 1977 wolves again began to appear in Sweden.

NA analysis has shown that these wolves originally crossed over from Finland and Russia. Since then they have gradually increased in population, especially in central Sweden.

The Scandinavian wolf population grew by around 25% in the 1990s, and in 2005 Sweden’s wolf population was put at around 150 – more wolves than there have been in Scandinavia for almost 100 years. More recent data suggests that the population has risen to approximately 300 individuals, though future in Sweden for this controversial species still looks far from certain and in some years recently, populations have actually fallen.

The wolf is an animal that inspires strong feelings on both sides, a symbol of the wilderness and untamed natural forces, but through careful conservation measures and ongoing education, the future looks much brighter than it did.

Wolves are social animals which live in a nuclear family – perhaps one reason why humans throughout the ages have had such a special relationship with them: they remind us of our own social groupings: two parents, often known as the alpha pair, together with their offspring from one or more years. The majority of cubs leave the pack before they reach sexual maturity, but some remain, and may act as babysitters for new arrivals.

The well marked-out territory is defended passionately against invaders – fights between rival groups are not uncommon and sometimes result in death. The size of a territory is generally between 800 and 1000 sq km – access to food seems to be the most decisive factor in determining territory size. Dung, urine and scratch marks are used to mark boundaries, but it is only the alpha pair who take part in territory marking.

Howling at the moon?

Wolves have been the subject of many myths and legends throughout history – one of which is that they love to howl at a full moon. In fact, there is no evidence that wolves prefer a full moon, but perhaps one explanation could be that sound carries further in cold, clear weather. Or perhaps that humans also prefer to be out and about on moonlit nights!

A wolf howl is a song full of meaning and function – and each wolf has its own distinctive voice. When wolves howl together it is often very difficult to estimate numbers, in the same way that a human choir often sounds more than the sum of its parts.

Howling clearly helps to bond together the members of a pack, but also serves as a signal to other wolves, an announcement that ”We live here and this place is ours”.

The howl of a wolf is both an extraordinarily emotive and at the same time emotional sound – should one of the alpha pair die, the remaining alpha wolf may come to the place of its death to take up what sounds, to human ears, a particularly mournful howl.

The pack also howls together to ready itself for a hunt, like a sports team ”psyching itself up” – and this sounds very different. The wolf vocalises for many reasons – a short barking may signal a warning, for example. But, perhaps ironically, wolves are for the most part very quiet animals.

Howling with wolves – a unique experience deep in the Swedish forest

Many words have been used to describe that unique sound, the howl of the wolf: spine-tingling, spiritual, awe-inspiring, thrilling. Whatever adjective you may choose, one thing is for certain: the experience of hearing the howling of a wild wolf pack echoing through the forest around you is unforgettable, a memory to be cherished and the stuff of dreams for many years to come.