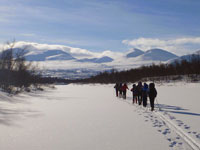 Why ski touring and cross country skiing offer a more environmentally-friendly alternative to downhilll skiing for your next winter holiday.

Climate change is reducing the snowfall in many previously snow-safe resorts, and rising temperatures are leading to dramatic changes in snowfall patterns.

But interview a cross-section of downhill skiers on the slopes and ask them what they like about skiing, and many are likely to mention something about their love of the outdoors and the beauty of the scenery.

Therein lies the rub. The truth is, downhill skiing can have an enormously destructive effect on the fragile mountain environment:

As lower altitudes experience problems with snow cover, there is a tendency to move resorts further and further up into the mountains, into areas which are often the last stronghold for threatened species of plants and animals.

In Austria, pressure from the ski industry has resulted in the local authorities lifting a ban on ski resorts in the previously protected area of the Gepatsch glacier. Not that this is a guarantee, as since 1850 Europe has lost almost 50% of its glacier cover. The Swiss resort of Andermatt has even wrapped its glacier in a protective PVC blanket at times to combat the summer melt!

So, can I ski and still be green?

There is an increasing movement in the downhill ski industry towards more responsible practices, and this does hold some hope for the future. Reducing the carbon footprint of your trip and choosing your resort carefully will certainly go some way to greening your ski holiday. Alternatively, DON’T GO DOWNHILL SKIING!!!

Cross-country skiing, ski touring and snowshoeing all have a significantly lower impact on the environment than downhill skiing. They require far less infrastructure, reducing pollution, habitat degradation and energy use. What’s more, being out on your own in the forest with nothing but the crunch of your snowshoes or the “swoosh-glide” of your skis to break the silence is a magical feeling – a TRUE outdoor winter experience!

At Nature Travels we specialize in low-impact, responsible outdoor activities in Sweden, Finland and Norway. Take a look at our range of ski touring and cross country skiing adventures, and discover a new world of winter experience!