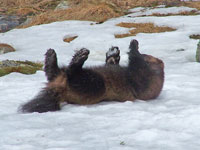 Wolverines are Sweden’s least known and most secretive large predator, and one of its most misunderstood. With such a confusing name, many people assume it must be some kind of wolf, perhaps a smaller cousin to that icon of the wilderness, the grey wolf.

Actually, wolverines are mustelids, a family which includes badgers and otters, and have far more in common with these animals than with their canine namesakes.

Wolverines in Sweden have had a very hard time of it indeed, and have been saddled with a terrible reputation. Myths and folk wisdom have labelled the wolverine (in an image that is reminiscent of the folklore surrounding our own red fox here in the UK) as a bloodthirsty killer, a vicious glutton which takes pleasure in killing more than it really needs.

In reality, the wolverine has been called “the hyena of the northern mountains” and is for the most part a scavenger, actually a rather poor predator.

In Sweden wolverines live predominantly on reindeer – which sometimes brings them into catastrophic conflict with the reindeer herding peoples of the north. When the snow has a crust, which is hard enough to support a wolverine but not the heavier reindeer, a wolverine has a chance of bringing down a reindeer, and this perhaps is what has given them such a bad reputation as wasteful killers.

In fact, wolverines do not eat their whole kill in one go, but will, like the fox, hide most of it and return to it later. Traditionally wolverines in Sweden have been confined to the northern regions, though some are now spreading south, finding a new source of food – the by-product of the annual (human) elk hunt.

European wolverines are generally 70-85 cm long, rather smaller than their North American counterparts (which can reach 110cm), with a tail around 20cm long. An adult may weigh almost 20kg. Visually they resemble a large, brown, bushy-tailed badger. They are widely distributed throughout the northern hemisphere, inhabiting tundra and northern forest regions.

Mating takes place between April and August, with 1-4 cubs being born the following February or March. While reindeer are the mainstay of their winter diet, in summer Swedish wolverines subsist mainly on small rodents, birds and vegetable matter. Wolverines are at their most active through the night and at dusk and dawn.

Sweden’s population has risen in recent years from only a couple of hundred to an estimated 600-700 individuals and wolverines are spreading slowly south into the areas away from the reindeer herds.

A protected species in Sweden, the population is nevertheless subject to illegal hunting and persecution, usually as a result of conflict with the interests of reindeer herding. Since 1993 there has been an ongoing project to study the species with a view to planning for its conservation, in and around Sarek National Park in Lapland – a large expanse of trackless mountains often called “Europe’s Last Wilderness”.

A total of 168 wolverines have been captured and fitted with radio transmitters to allow scientists to monitor their movements and behaviour.

With careful management and greater understanding, we hope that the mountains of Sweden will echo to the sounds of wolverines for many years to come!

Nature Travels offers a number of experiences in Sweden which take place in around the range of the wolverine. Though we cannot promise you a glimpse of this elusive creature in the flesh, the wolverine’s homeland is a breathtaking and inspirational landscape, and you may find fresh tracks criss-crossing your path! See for example Discover Mountain Ski Touring in Lapland, on which Bob from the Nature Travels Team was privileged to catch sight of a wolverine in the wild.

To find out more about wolverines and wolverine conservation, visit http://wolverinefoundation.org/