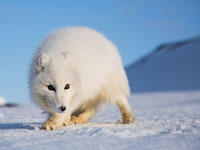 The arctic fox, Alopex lagopus, otherwise known as the polar fox, is one of Sweden’s most threatened mammals and in danger of extinction everywhere in the European Union.

In recent years, thanks to dedicated conservation efforts, populations of the arctic fox in Sweden have started to increase. However, numbers are still very small and the future for the arctic fox remains fragile.

In summer 2006, just three litters of foxes were born in Sweden, five in Norway and none at all in Finland. For this reason, Nature Travels chose in 2007 to support SEFALO, a joint project between Sweden, Finland and Norway, as its conservation project of choice.

Ten years later, in 2017, 31 litters of arctic foxes were born in Sweden alone, a very positive increase and a hopeful sign of the possible long-term recovery of this species. The SEFALO project is no longer in operation, but you can see information and statistics for Swedish arctic fox populations and find out more about current conservation efforts from the Swedish Arctic Fox Project on the Stockholm University Department of Zoology website.

Arctic foxes are currently most common on Svalbard, 500 miles off the coast of mainland Norway.

What problems does the arctic fox face?

– Such a small population makes the species extremely vulnerable to changes in demographic factors, or “accidents” such as an outbreak of disease.

-Large areas previously populated by arctic foxes are now empty, and remaining animals find it difficult to find a non-related partner with which to breed.

– Arctic foxes are highly dependent on the natural population fluctuations of small mammals, such as lemmings, on which they feed. These cycles of peaks and troughs tend to repeat every four years, and a “bad” year for rodents can be disastrous for arctic fox populations.

– The red fox, Vulpes vulpes, is a strong, successful competitor, and is currently expanding its range into territories inhabited by arctic foxes. Climate change, which is affecting arctic regions in particular with alarming rapidity and severity beyond initial projections, is exacerbating the spread of competing species into arctic fox territory.

– Itself a top predator, the arctic fox is also a victim of predation, ironically from many species which are themselves endangered, including the wolf, wolverine and golden eagle. Traditionally, arctic foxes have been used by indigenous peoples as a source of meat and fur.

What can be done to conserve and enhance current arctic fox populations?

A number of conservation activities are underway to attempt to increase populations arctic foxes in Sweden, Norway and Finland and mitigate the factors which threaten their survival:

-With the assistance of volunteers, population and behavioural data for arctic foxes is collected. Some animals have been tagged with radio collars to allow their movements to be monitored and to increase understanding of their behavioural patterns.

-A programme of supplementary feeding is being trialled in an attempt to increase the rates of productivity and decrease mortality among juveniles. Birth and survival rates are then compared with years when no feeding took place to assess the effectiveness of the strategy.

-In some cases control of the red fox population is necessary to safeguard the most valuable arctic fox territories.

-In areas around arctic fox dens in Sweden, it is hoped that a ban on ptarmigan hunting will reduce disturbance in some of the important arctic fox breeding grounds.

-Populations are monitored for disease and there is ongoing research into the cause of diseases likely to affect the fox populations.

-A programme of public education aims to highlight the plight of the arctic fox and raise the profile of the species as a priority for conservation.

With careful conservation measures, sufficient financial and public support, and a generous amount of good fortune, we hope that the future for the arctic fox both in Sweden and elsewhere will continue to brighten.

Nature Travels has a number of experiences in Sweden which take place in and around one of the country’s most important remaining arctic fox strongholds – Vindelfjällen Nature Reserve – and some of our partners in the area have been actively involved arctic fox feeding projects, delivering supplementary food to the local fox populations when it is most needed.

We offer two options for dog sledding in the Vindelfjällen area:

Arctic foxes are also comparatively common on Svalbard in Norway, the location of our Midnight Sun Dog Sledding in Svalbard experience.

For further information on work to conserve the arctic fox, see http://internt.zoologi.su.se/en/research/alopex/

Find out more about how Nature Travels supports conversation projects in the Nordic countries and elsewhere.