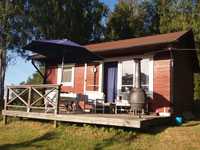 Sofia and I are halfway through a three-week stay in the Stockholm Archipelago, where we’re lucky enough to have a summer house on a small island in the middle archipelago.

At a time when so much has changed and so quickly, it feels both very strange and very wonderful to be here again.

It’s a place where time stands still, yet is dynamic and ever-changing. Here, the turmoil of recent months seems at once very present and at the same time almost impossibly distant.

Our summer house was once occupied by Sofia’s grandmother, and much of the interior and character of the house remains unchanged since then. There are a few concessions to modernity that have been added over the years – a fridge freezer, electric radiators – but in essence this is the same house it’s always been and is all the more special for it.

Our water still comes from a well – some of the sweetest water you’ll ever taste – and when nature calls, we take a short trip down the path to the “utedass” to do our business in the composting loo.

In the mornings, we sit on the porch cradling our coffee mugs, relishing the cool air before the sun breaks through the trees and the heat of the day begins to build.

We look out across the sweeping lawn, past the redcurrant bushes and the little potato plot fenced off to keep out the deer, to the water beyond.

Maybe the surface is rippling in the morning breeze, or maybe it’s mirror-calm, reflecting the birches and pine trees which cover the surrounding islands. This morning the moon was still visible and the clouds streaked across the sky like flames.

In a while, I’ll grab my towel and wander down to the jetty for a morning dip in the cool, clear water. Unlike the salty sea of the ocean back home, here the water is just slightly brackish and leaves you feeling crisp, clean and tingling with life.

But for now, it’s just time to sit, to look and to listen to the sounds of the world.

Overhead a cormorant passes across the island. It’s so quiet you can hear its wings moving the air as it flies. Out on the water, a family of swans swim past, their cygnets almost grown now and ready to go their own way.

Wait a while longer and we might catch a glimpse of the White-tailed Sea Eagle, one of the archipelago’s most majestic inhabitants, soaring above us and casting a shadow on the grass from its enormous wings. In the past, we’ve had Ospreys nesting here too – none this year, but I’m hoping they’ll be back again one day.

To our left, at the edge of the forest, the familiar knock-knock-knock of a woodpecker breaks the silence. In the corner of my eye, there’s an auburn flash between the trees and a rustle of leaves. Searching the shadows, I spot a red squirrel, commonly seen here but such a rare sight back home, its tufted ears twitching in the morning air.

If I were sitting down by the jetty now, I might see the mink emerging from its hiding place beneath the stones, gliding through the water and into the cover of the reeds.

The archipelago is waking up. You can hear the occasional boat engine as Stockholmers make their way out to some of the larger islands for the weekend. A mast pokes above the trees and a sailing boat drifts by. Away from the main thoroughfares trafficked by the larger boats, here only smaller craft pass into view, adding more variety to the scene.

What to do today? Maybe I’ll take the kayak and go exploring. We might pack a picnic lunch into the canoe and go for a stroll on one of the neighbouring islands, or I might do some more work on a new path I’m making through the forest. Or maybe it’s a day for lazing in the hammock, punctuated by the occasional swim to cool off.

Fast forward a few hours. It’s evening now, with the sun sinking behind the treetops and painting streaks across the clouds. We’re back on the porch, gazing out once more at the water.

The stage remains the same, but the players have changed. The evening air vibrates to the sound of a thousand crickets. Small voles dart from one hiding place to another, their brown forms zipping through the short grass like rocket-propelled cigars.

Sit quietly and we might see a roe deer hopping through the bushes.

Ten days from now we’ll be back in the UK, but if we were still here in late August, when the Swedish summer holidays are over, the schools have started and the archipelago is once again all but deserted, we might see the badgers emerging from the forest to eat the autumn plums, or even a moose silhouetted in the fading evening light, tugging leaves from the trees.

This is a truly magical place, filled with the natural beauty, freedom and simplicity of summer in Sweden.

The adventure, excitement and challenge of a dog sledding, ski touring or wild camping expedition all have their own magic, and I can’t wait until my next chance for one of those. But until I first came here more than 20 years ago, I don’t think I’d ever realised how much you can experience by simply sitting still with a cup of coffee.