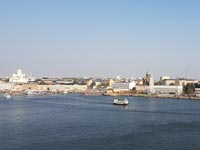 Bob from the Nature Travels team spends a day exploring Finland’s capital in May as part of his visit to some of our new experiences in Finland.

The night train from Oulu (on which I had spent a restful night in unaccustomed luxury, in a private cabin with en-suite shower and toilet! – thank you VR Finnish Railways!) pulled into Helsinki station at just after 7am on a beautiful May morning.

I’d been provided with a 24-hour Helsinki Card city pass to try out (48 and 72-hour passes are also available), so before I went to bed the night before, I’d browsed through the brochure that comes with the card and planned my day. The Helsinki Card offers unlimited use of public transport and free or reduced price admission to many of Helsinki’s attractions.

As not much is open in Helsinki before 9am (or 10 or 11 for some of the attractions), I had a couple of hours to kill, so I wandered through the wide, quiet streets towards the water, where I settled down on a park bench in the morning sunshine for a snooze with a view, looking out across the shining blue Baltic Sea to some of the islands that fringe the shore and watching the sailing boats glide by.

Soon it was time to potter along the seafront to the main harbour for the Beautiful Canal Route sightseeing cruise, which is one of the many things that are free with the Helsinki Card.

The cruise is not so aptly named, actually, as rather than canals, the majority of the trip takes in some of the nearest of the gorgeous archipelago islands that lie just off the coast, but it’s great for a taster of archipelago life and a basic history lesson on Helsinki’s turbulent past. Prepare to be just a little jealous at how nice the Helsinkians have it when you see the idyllic summer houses!

I’m not a huge art fan, but I do enjoy a look at a gallery or two in any city I visit, so after a spin on the SkyWheel (Helsinki’s version of the London Eye), it was time for some culture as I headed back towards the station for the Museum of Contemporary Art Kiasma. Whatever your view on modern art (mine ranges from “clever” to “rubbish”), it’s always fun. The Kiasma is well worth a visit, and once again free with the Helsinki Card. Prepare to blush if you’re caught staring too long at some of the rather naughty photos currently on exhibit.

With my flight time approaching, my day in Helsinki was already drawing to a close and I hadn’t yet bought the goodies I’d promised to take back to the office (in the end I settled on some licquorice and a bag of something wonderfully named Suffeli Puffi), but I still had time for a quick trip to the Ateneum Art Museum, just a couple of hundred metres away and right next to the railway station. Here they had a fascinating exhibition of photographic portraits of rural and urban Finns in the mid-1960s taken by Ilmo. I have to say this turned out to be the highlight of the day. Oh and you’ve guessed it, entrance is free with the Helsinki Card.

Then it was time to board the airport bus, wishing I had another day or two to spend – but with the recent addition of Finland to the Nature Travels portfolio, I’ll be back soon!

So, some top tips for Helsinki? Here are 8 things I really liked, and one I didn’t:

And the thing I didn’t?

Well, “didn’t” is maybe a bit strong, but the SkyWheel (Helsinki’s equivalent of the London Eye) was rather underwhelming. It’s free if you have the Helsinki Card, so certainly worth a go in that case, as you’re likely to find yourself down by the quay for other attractions anyway, but otherwise I’d recommend saving the €12 ticket price to sample some of the many other delights Helsinki has to offer.

Nature Travels has a number of experiences in Finland, including Private Dog Sledding for Two in the Taiga Forest, Canoeing on the Tar Route in Kainuu and Snowshoeing in the Hossa National Park. All of these involve travel to Helsinki for onward connections. My thanks to Visit Finland for assistance with my recent visit and for arranging the Helsinki Card, and to VR (Finnish Railways) for the wonderfully relaxing train trip down from Oulu.

Prices given here are correct as of May 2015.