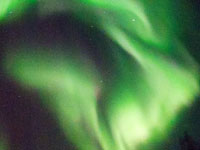 Jayne from the Nature Travels team takes a look at the beautiful phenomenon of the Northern Lights.

Here in the UK we are not well known for our Northern Lights displays (especially not now we are at the beginning of summer). However, as Aurora displays are sometimes seen (even here in Dorset in the south, where the Nature Travels offices are based), I thought I would take a look into what causes the phenomenon and what conditions are best to see them.

What causes the Northern Lights?

However, when the solar wind is strong enough or when the are a very large number of particles emitted (e.g. when they come from a sun spot) the charged particles from the sun break through the magnetic field and they collide with gas particles in the Earth’s atmosphere.

The collisions are what cause the Aurora, the colour of the Aurora is dependant on which gas particle the charged particle collides with (e.g. collisions with oxygen cause the green colourings).

How are the Northern Lights predicted?

Geomagnetic storms are caused by a solar wind disturbing the Earth’s magnetic field. They are measured on a scale of 1 to 5, with 5 being the strongest. When there is a lot of geomagnetic activity occurring, this is when the best displays of the Northern Lights can be seen.

The strength of the Aurora is measured against the Kp index; the Kp index ranges from 1-9 with 1 being the weakest and 9 the strongest and is a scale of geomagnetic activity.

Where is best to see the Northern Lights?

In general, the closer to the Magnetic Poles you are, the better your chance of seeing the Aurora. This is because the Earth’s magnetic field is weaker at the poles, so more charged particles get through to the Earth’s atmosphere. However ,you don’t have to travel to the North Pole to see the Northern Lights – some of the best Aurora displays in the world can be seen in northern Sweden, Finland and Norway.

What are the best conditions to see the Northern lights?

The Northern Lights and superstitions

In parts of Sweden it was believed that the lights were reflections from large shoals of fish and it was a sign any fisherman out fishing would catch large numbers of fish.

The Vikings believed that the Northern Lights were caused by light being reflected off the armour of the souls of Valkyrie warriors on their way to Valhalla.

In Finland the Northern Lights were said to be made by an Arctic fox running across the sky, flicking snow into the sky with its tail (or its tail touching the mountains causing sparks).

As someone who has been lucky enough to see the Northern Lights on a couple of occasions, it is not hard to see why there are so many myths and superstitions around the seemingly magical displays of lights dancing across the sky. I personally like to imagine they are caused by an Arctic Fox!

Jayne from the Nature Travels team

Nature Travels offers a number of winter experiences such as Dog Sledding and Active Accommodation in some of the best locations for Northern Lights in the north of Sweden and Norway. Of course, sightings in any location can never be guaranteed as the Aurora are a naturally occurring phenomenon.