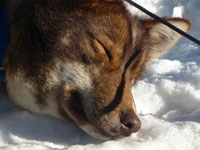 Jayne from Nature Travels joins one of our Northern Lights Dog Sledding in Lapland tours.

The morning of our first day’s sledding dawned a beautiful sunny day and began with meeting our sled dogs at the kennels.

My team were Reiker (my lead dog), Grizzly (Reiker’s niece), Norska and Fiona (my wheel dogs) 3 of whom were mid-distance (around 500km) race finishers!

Then it was time to feed the dogs and put coats on the smaller dogs for the night. The dogs’ food was a mix of meat and a dry mix (for added nutrients) in water, which they all seem to love!

All of the dogs were very friendly (although some were understandably a little shy around strangers at first) and were eager to meet us and give us hugs and receive strokes. I would have gladly stayed in the kennels making friends with every dog all morning but it was soon time to load our sleds, harness our dogs (which could be a little tricky with some of the more excitable or the shyer dogs) and set off!

As soon as we set out, the dogs, who had become very excitable whilst waiting to go, fell silent and soon there was only the sound of the dogs’ paws on snow and the noise of the sleds’ runners on the snow. The first part of our journey was through the forest, which was a great opportunity to practise our sled steering techniques. However the forest soon thinned and we were suddenly out on a frozen lake surrounded by mountains, the quietness combined with the scenery was magical.

The rest of the day was spent gliding across the frozen landscape getting to know our dogs, their different behaviours and perfecting our sledding technique.

After a day’s sledding, once we had made sure the dogs were settled (unharnessed and attached to the fixed line, with straw to sleep on for the night), we set about preparing the cabin lighting the fire in the main room and in the sauna, collecting water (filling the containers in the sauna with water), chopping wood etc.

At the end of the day it was time for a relax and a sauna and, as the sauna heated water in a metal container, a chance to wash.

The next few days were a wonderful mix of sledding through the stunning Swedish scenery on frozen rivers and lakes and through forests (this included some rather steep uphill parts where we had to get off our sled and walk/jog behind to help the dogs or when going down hill trying to slow the dogs down and keep them from getting to close to the sled in front), feeding and generally taking care of the dogs and relaxing in the saunas in the evenings.

For me the highlights of the trip where:

All in all is was a great trip and one that I will never forget.