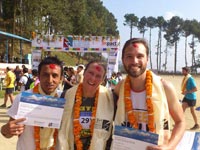 Do you run the run? Time to talk the talk! Here’s a list of some running lingo that can be useful to know.

Nature Travels now offers a range of trail running adventures, a great opportunity to take a runfie during an LSR!!!

Aid station/Water station – Where you get water and sometimes gels or other snacks during a race.

Bib – The paper with a number (Bib number) that you wear during a race that identifies each runner in a race.

Bling – The running medal you get given for completing a race.

Dreadmill – Running inside on a treadmill. As it can be boring, it’s been nicknamed “dreadmill”

Fartlek – A term that comes from Swedish and directly translated means “speed play”. It’s a kind of interval or speed training. Fartlek can be incorporated into any run. The basis for it is simply, “I’m going to run as fast as I can until I reach that tree, that stop sign, that car, that house, etc”. Then you run slower again for a bit and then you choose a new target and you run faster again!

Negative Splits – Run slow at the beginning, picking up speed in the middle and speeding up towards the end. Gives your muscles times to warm up. You have your race pace in the middle and then you sprint in the end.

Streaking – Running many days in a row or running the same race many years in a row.

Runfie – Selfie taken during a run.

Runch – Running at lunchtime (while working).

Runner’s High – A feeling of being invincible, a reduction in discomfort or pain, and even a loss of sense of time while running. A feeling of complete effortlessness. You’re in your groove, and it’s almost easier to keep running rather than stop. When your running feels easy, exhilarating, fun, euphoric – you feel pure elation, reduced stress, and have a decreased ability to feel pain. This is due to the release of endorphins.

Running Naked – Running without technology and just for enjoyment without measuring speed or distance.

STRAVA – Social network for runners, cyclists, swimmers and triathletes. Used to log their training and support each other.

Taper – The period when you reduce the amount of training you’re doing when you start to get closer to race day (but not stop it) so the body gets to rest and recover and is ready for race day. The taper starts directly after you’ve done your longest run and it’s important for the body to be able to recover fully and be ready for race day.

The Wall – The point when you totally run out of energy and negative thoughts start to take over. Often people say they hit the wall around 20 miles (32 km) into a marathon.

Ultra – A Race that’s longer than a marathon, often 50 miles or over.

CR – Course record. The fastest anyone has run that course.

DNF: Did Not Finish. Simply when you started a race but you didn’t finish it.

LSD – Long Slow Distance (not anything else!) – Often run on weekends. It’s running at a constant pace with low to moderate effort for long distances or duration.

LSR – Long Slow Run. This is when you do your LSD training.