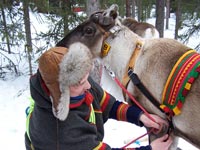 The Sámi began to settle in the area in and around the Arctic Circle about 10,000 years ago at the end of the last Ice Age. They were to spread over the borders of 4 nations, Norway, Sweden, Finland and Russia. There are about 70,000 Sámi in the world today. Norway has the largest population at 35,000; Sweden is next with 17,000 Finland has 5,000 and Russia has around 2000. The Sámi have a unique language, dialects and culture including a Sámi national flag. The territory in which they live is known as Sápmi or Samätnam.

Traditional Sámi occupations include reindeer herding, fishing, hunting and small scale agriculture. The Sámi traditionally manufacture articles for everyday use from raw materials available from their surroundings. Products are made from sustainable sources. Houses, clothes, boats and sleds are made from materials indigenous to the Sámi territories. Items such as knives are beautifully made using reindeer antlers and are works of art as well as functional items.

The Yoik is the traditional song of the Sámi which is unique and is seen as a way of remembering nature in terms of animals or people. To Yoik, is a way of singing to nature, evoking the spirit of people or animals. Until relatively recent times, yoiking was discouraged and disliked. Traders who came north in search of reindeer skins brought alcohol, consumed it and yoiked. It soon became associated with drunkenness. Christian pastors did not approve and yoikers suffered extreme penalties. But a revival sparked in the 1970s and continues today.

The Sámi subsist on Reindeer meat, fish, bread, berries and milk products. The harsh winters mean that fresh fish is the staple in the summer and in the winter fish and reindeer meat is smoked, salted and dried.

Bread is baked over a fire either on a stone slab or in a frying pan. Thin bread cakes are made in this way. Vegetables are hard to grow in the Sámi regions and cloudberries and lingonberries make up a common part of the diet providing vitamins to the diet. Sorrell or ‘Juobmo’ is one vegetable that can be foraged and stored over the winter months. It can be mixed with milk and kept in kegs. Boiled sorrel can be served with milk and sweetened with sugar. Angelica is also eaten, the stalk can be used raw or boiled and formerly angelica was used as a medicine.

On the 26th April 1986 the nuclear power plant of Chernobyl failed and radioactive poisonous gas fell on southern Sápmi. The radioactivity was absorbed by plants, especially lichens. Lichens are the main staple for reindeer during the autumn and winter. At slaughtering time during the autumn the amount of caesium in the reindeer meat was so high that it surpassed the level allowed for human consumption. The meat had to be discarded. In Sweden the meat from 30,000 reindeer had to be buried. The Sámi were shocked and in despair, and many feared for the future.

Today slaughter is scheduled for early autumn before the reindeer begin to eat lichens. This has had the effect that the caesium content in the meat is not as high as it was directly after the accident. The Sámi can once again sell meat to the slaughterhouses. The disaster at Chernobyl has shown how fragile the existence is for people today who live with and from nature.

Our Reindeer Encounter and Sámi Experience in Lapland is located in the far north of Sweden and makes an ideal add-on activity in combination with any of our dog sledding tours in the Kiruna and Abisko area.