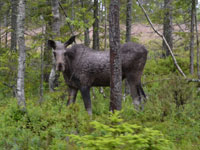 The moose (or elk), Alces alces, is an iconic animal for Sweden – a symbol of the wild, a symbol of the majesty and dignity of Sweden’s natural areas. The moose holds a particular fascination for overseas visitors, though in Sweden it is in fact one of the country’s most common wild animals.

During the summer, when populations are at their height, there are around 350,000 moose distributed across the country, an average of 10-15 moose per 1,000 hectares.

Of these, just under one third will be culled annually during the autumn moose hunting season, and moose is a popular meat throughout Sweden.

Despite prolific hunting, moose populations continue to increase across the country. By the early 19th century, moose had become practically extinct in Sweden due to unregulated hunting and predation, but since tighter controls were introduced, populations have risen steadily.

A fully-grown adult moose will eat between 10 and 12kg of food a day, and an incredible 15-30kg during the summer.

As herbivores, about half of the moose’s diet is pine, and during the winter an adult moose can consume 5,000 pine trees! Such voracious appetites may put pressure on some local ecosystems, and so managing the moose populations of Sweden has become necessary to protect fragile habitats.

Mating occurs in early September, with the males vying for access to the females in dramatic antler clashes, and calving season for the moose is May and June, when one or two calves are born each weighing 10-15kg.

These young calves, which are born reddish-brown but later develop a grey-brown coat, will stay with their mother until the next breeding season, when they will be driven off to make way for the new calves.

By November, when they will be eating only solid food, the young moose will already weigh 130-150kg. This rapid weight gain stands them in good stead to survive the coming winter.

Once fully grown, a bull can weigh anything up to 800kg, and a cow around 450kg on average. Only bulls have antlers, which are shed each year during the winter. Every year up to the age of around 10, bulls will add extra points, or tines, to their antlers.

Some feel that hunting pressure on those bulls with the largest antlers has led to a decrease in quality of the moose gene pool, and debate is ongoing about how best to reconcile the interests of the hunters with the conservation lobby.

Moose that manage to avoid the hunters can live to be 25 years old in the wild.

Like those of other deer species, moose antlers are covered with a velvety skin while they are growing. Filled with blood vessels, this skin provides the antlers with everything necessary for growth.

Once the antlers are fully developed, the moose will shed the velvet by rubbing the antlers against trees and bushes. Although the pace of growth, especially for a large set of antlers, is truly astonishing, closer inspection reveals that antlers are not the solid objects one might imagine. Rather, they are porous inside, with only a hard external coating to stand up to the rigours of combat.

Despite their size, moose are wonderfully graceful animals, moving quietly and fluidly through the deep forests and across the open fields in between.

Moose can often be spotted standing quietly in open spaces at the edge of a forest as the evening sun sets. Moose are also accomplished swimmers, and in the archipelago areas can sometimes be seen striking out between the islands.

Our Moose Safari experience offers intimate encounters with the moose of Bergslagen, an area where moose outnumber the human population! From your base in an authentic charcoaler settlement, an experienced guide will take you deep into the surrounding forests to meet the King of the Forest in its natural habitat!