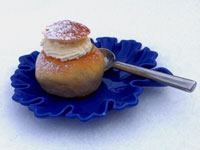 Pancake Day, Pancake Tuesday, Shrove Tuesday – as the start of Lent approaches, in kitchens nationwide, Brits will be scraping the aftermath of over-ambitious pancake-flipping contests from their floors and walls while a hot debate rages between lemon-and-sugar-traditionalists and ice-cream-and-chocolate-sauce progressives.

Meanwhile in Sweden, a slightly different but no less serious ritual is underway: the eating of semlor on fettisdag, or “Fat Tuesday”. Semlor (singular semla) are wheat buns spiced with cardamom, scooped out and filled with almond paste and topped with whipped cream and a dusting of icing sugar.

Like the pancake, the semla is connected to the beginning of Lent. Over the years, perhaps also like Pancake Day for many of us, it lost much of its religious significance and became a traditional dessert every Tuesday between Shrove Tuesday and Easter. Today, commercial pressures have extended the semla season still further, and now semlor are available from most bakeries from just after Christmas until Easter. On average, Swedes consume five shop-bought semlor a year, plus a number of home-made ones!

Swedes approach the making, eating and judging of semlor with great enthusiasm, with many newspapers holding competitions to find the best ones in town, with just the right combination of almond paste, cream and a moist bun.

But if you miss semla season this year, don’t despair. All year round, the Swedes take the business of coffee breaks very seriously indeed, and the ritual of fika – to meet old friends, make new ones, catch up on gossip, and take an important time out from the stresses of the day – is deeply ingrained in the national psyche.

So, we wish you a very happy Fat Tuesday: may your pancakes always land sunny side up!

To see our range of wildlife and outdoor experiences in Sweden, visit www.naturetravels.co.uk