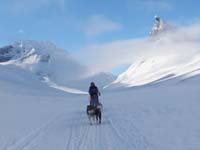 Bob from Nature Travels gives some thoughts on lightening the load for your next winter trip:

Over the last few years, I’ve tried to reduce the amount I bring with me when travelling, especially in winter. If you’re thinking of going on a winter adventure with us, such as one of our dogsled tours, and would like to travel a little lighter, here are a few ideas that may prove helpful.

Why go hand luggage only?

Earlier this year, I travelled to northern Sweden by flight London-Stockholm and night train Stockholm-Kiruna to take part in our 8-day/7-night Dog Sledding and Winter Camping on the King’s Trail tour, travelling hand luggage only.

Here’s what I took:

The great thing about dog sledding is that all specialist outer clothing (snowmobile overalls, warm hat, gloves, winter boots and sleeping bag) is provided as standard, which considerably reduces the amount you need to bring yourself. For this tour, towel and thermos are also provided.

I brought a 40 litre rucksack containing:

When travelling, I wore/carried with me:

No packing list can ever be 100% right of course – however much or little you bring, there will always be something you wish you’d included or left behind, and the particular conditions encountered on a tour can also affect enormously the actual clothing and equipment you will use. But with the above I was sure I had enough to keep warm in any situation while at the same time not taking too much unnecessarily.

All this talk of dog sledding has suddenly made me long for the snow to arrive and get packing for another adventure – roll on winter!!!