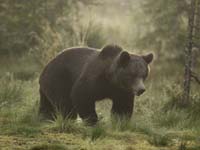 If you go down to the woods today, will you see a Grizzly Bear or a European Brown Bear?

What is the difference between a Brown Bear and a Grizzly Bear?

The answer is not a lot really, the main difference is which continent they live on. The Eurasian (or European) brown bears and Grizzly bears are subspecies of the same species of bear, Ursus arctos. The name grizzly is used when referring to a number of different subspecies of brown bear found across North America including the mainland grizzly (Ursus arctos horribilis). Contrary to what you might think, the name grizzly did not arise because bears can be bad tempered but is actually to do with the lighter coloration of the ends of their hairs.

How many Brown Bears are there in the world?

Whilst the Brown Bear as a whole species is listed on the ICUN Red List as “Least Concern” due to the large numbers globally, there are local populations which are under threat of local extinction.

Will I see a bear whilst travelling in Scandinavian and the Nordic countries?

The population size varies greatly between the countries – for example in Sweden there are thought to be in the region of 2000 Brown bears, in Finland around 1200, whilst in Norway only around 136 individuals. However, this doesn’t mean you are more likely to see a brown bear in Sweden than Norway, as in general Brown Bears are very shy, so wherever possible will avoid coming into contact with humans.

What to do if you encounter a Brown Bear

Whilst the chances of encountering a Brown Bear in Sweden, Finland or Norway are slim (as in general Brown Bears will leave the area before you reach it having already smelt or heard you coming), if you do meet a bear it is recommended you do these 4 things: