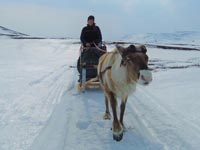 Nature Travels celebrated its 15th birthday on 1st March this year – 15 wonderful years of working with outdoor adventures in Sweden, Finland and Norway, helping over 16,000 guests from more than 20 different countries discover the wonders of these beautiful countries.

Founders and owners Bob & Sofia Carter look back on the last 15 years and pick their Top 10 Adventure Memories that they’ve collected along the way!

15 years is a long time and there have been so many fantastic moments in the Nordic outdoors that selecting a few and saying they were better than any of the others is impossible! But if I’m now going to share some of my magical Nordic outdoor memories with you, there are some that need to be mentioned.

#1 Dog Sledding into the Sunrise

The first one was on my first ever dogsled tour, a tour over New Year in Jämtland in Sweden. We had been out for 5 nights going from cabin to cabin and this was our last morning. We had got up early because we had some distance to cover to get back. While we were harnessing the dogs and packing the sleds, the sun slowly started colouring the sky orange. We all got ready and some of the dogs started to howl ready for the off.

Then off we drove straight into the rising sun reflecting its colours on the snowy landscape, with the dogsleds and their drivers just showing up like silhouettes. Magical!

Quiet a few years back, I had the opportunity to take part in a Reindeer Sled Safari travelling for 8 days by reindeer sled over the tundra from Sweden into Norway, following the same route that the Sami take their reindeer for the summer.

Having done dog sledding before, I thought it would be similar, but I couldn’t have been more wrong. Even though we were of course travelling by sled drawn by an animal through a snowy landscape, I think there the similarities ended.

A reindeer is very strong and we had one reindeer per sled and travelled at a very slow pace through the landscape. You could sit on the sled if you wanted or stand at the back if you wanted to move around to keep warm.

It was very peaceful. Very relaxing…except at one point when my reindeer decided he wanted to go home!

He turned around and left the track and started walking in deep soft snow, turning in the opposite direction that we were supposed to be going. (Did I mention that reindeers are strong?) It took all my strength to hang on and to lean on the brakes to stop him just disappearing off up the mountain.

Luckily, we had Nils on a snowmobile with us for backup, (even though he didn’t travel with us, as that would have destroyed the peace and quiet when he was around). He was some way ahead, and after a while he started wondering why we never showed up.

So he came back looking for us, and then he saw me far away from the others covered in snow (as I’d been braking my sled in the loose snow), so he drove over to help me. As we know each other as friends, his first comment was, “I bet you’re going to sleep well tonight!” 😀

It was a brilliant trip. We stayed in Sami lavus (traditional tipis) some nights or in reindeer herder cabins up in the mountains on others, and slowly travelled over the mountain pass into Norway. We followed the same route as the reindeer take after the winter to spend the months in higher pastures.

In Swedish folklore, we have a magical being that lives in the forest (a bit like trolls or elves) called Näcken.

Näcken is a man or a male spirit that sits naked along rivers and plays enchanted songs on his violin, to lure women and children to the water and drown them.

I once travelled down a river in Sweden on a raft and for a while we heard this distant music playing and the music came closer and closer as we drifted down the river, then we came around a bend and there he was: Näcken. But I guess there is safety in numbers, because we all just drifted past…no drownings…

Another experience I remember well was a group trip to Finland, and part of it was to spend a night in a photo hide.

There were two types of hides. Three smaller hides for two persons each and with just two chairs, with two simple beds behind if you wanted to lay down for a while and a simple bucket-style toilet behind a curtain and then a bigger house where you sat with a viewing platform. I can’t describe the bigger one, though, because I never went there…

We went first to view the small hides, and myself and the girl I stayed in the hide with decided already then that we wanted to stay in one of the small hides. So we stayed while the rest of the group left. And it didn’t take long before we had wolverines outside, great views of them looking around. First just one but then came another. We were sitting there amazed as they were just outside our hide and we didn’t dare make any sounds or talk to each other, but the smile on our faces were big.

After a long time, they suddenly all rushed off….and we had a knock on the door and it was the host coming back with the others that were going to be in the other hides and also with our food for the night. He also hanged up the meat for the animals in the area around the hide. Then he wished us a good night and left.

The others settled in and it got quiet again and then the wolverines were back. One by one they came, and it was difficult at first to see if they were different animals or the same one, but then they came two at the same time and then you started to see the differences between them. Then they all froze and looked in the same direction like they were afraid and then they ran.

It was empty for a short while, then from behind the hides (we didn’t have any windows in that direction) came a bear. I never thought I would sit so close to a wild bear – it was just outside the hide!

It was an amazing experience and I couldn’t stop smiling, and then came another bear. We sat there watching them really close up until something suddenly spooked them. But then it didn’t take long before the wolverines came back.

The bears came back once more and the wolverines were there all through the night. An unimaginable wildlife experience I never thought I would have.

The picture isn’t taken with any high-zoom lens, it’s just with my normal phone camera that wasn’t very sophisticated back then. Just to give an idea how close they were!

Another lucky opportunity I had was to join one of our Ice Skating on Natural Ice tours in Sweden.

Gliding along through an island landscape on what is normally water is magical. What fascinates me is that the ice changes so much from day to day, hour to hour. And all the different sorts of ice there are, some are good to skate on and others are not (you can read my blog if you’d like to know more!)

But when you find that mirror-like ice that looks like the surface of a lake. You can just glide in the sunshine and stop on an island for your lunch break and barbeque your sausages over a fire before your glide on. That is magic!

Over the last 15 years, Nature Travels has given me so many wonderful outdoor experiences in Sweden, Finland and Norway. I’m looking forward to many more!