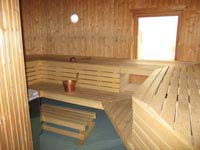 For many travelling to the Nordic countries, a sauna is an essential part of the Nordic experience and is a great way to soothe aching muscles after a hard day’s activity such as ski touring or simply as a way of relaxing with friends in the evening.

The word sauna (pronounced sow (to rhyme with “how”) nah) comes from the Finnish for bath or bathhouse and is an important part of the Finnish culture (in Finland it is said that there are enough saunas that the whole population (around 5.5. million people) could have a sauna simultaneously!). Saunas also play a very important role in Sweden and Norway.

The first saunas were thought to have been built over 2000 years ago but were very different to the saunas we know and love today. Instead of a wooden building (or wood-lined rooms) which are a feature of the more modern sauna, the first saunas were pits dug into ground where a fire could be built and stones placed to heat up. Throwing water on the stones produced steam – in Finnish this steam is called “löyly”. Water was also heated by the sauna and used for washing.

In the past, as the sauna was a fairly hygienic room with access to hot water, women would often go there to give birth (though the sauna was not usually heated at the time!). It was also a place where the dead could be laid out and the final cleansing rituals could be performed in a peaceful environment. Having a sauna with your business associates after a meeting was a way of affirming that the meeting had gone well.

A more traditional style of sauna is the smoke sauna – this is a sauna which, unlike a normal sauna, does not have a chimney. A fire is built and allowed to burn down to the embers; the smoke is trapped within the walls of the sauna blackening them. As you enter the sauna, the smoke escapes through the door and you are left in a warm, pleasant smelling sauna.

One sauna tradition which may seem a bit unusual to the sauna novice (though it is not commonly practised in public saunas) is taking a bunch of birch leaves and gently beating yourself with them – this aids your circulation, is good for your skin and creates a lovely smell inside the sauna.

If you are now longing for a sauna, many of our cabin accommodation options in Sweden and Finland come with use of a sauna. For those into winter activities, there is no better way to relax (and have a wash) after a hard day’s dog sledding than by having a sauna!