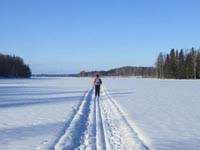 Cross Country Skiing in Eastern Finland is a guided ski tour in north Karelia and for the first time this season they’ve introduced a beginner’s version. Niki from the Nature Travels team joined the first tour in February 2018 and tells us a bit about her trip.

We were warmly greeted by on arrival to the first guesthouse by Riika, who was to be our guide for the week, and once we had settled into our accommodation at an old schoolhouse for the next few nights and tried on our ski boots, we had a lovely comforting dinner of salmon and potato soup followed by some yummy Finnish pancakes.

Food is a real highlight on the tour and every dinner was a treat! There’s a focus on locally-sourced and produced food with some traditional Karelian recipes to show the best the area has to offer.

Apart from eating delicious food, we were of course also there to learn how to cross country ski! As a complete novice and I hadn’t done any downhill skiing by this point, I wasn’t quite sure what to expect. Jorma joined us on the first day to give us some instruction, but with cross country skiing, the best way to learn is by doing! After he had shown us the basics and with instructions translated by Riika, we had a few runs up and down the prepared tracks on the lake and once we felt comfortable and confident enough to go further, we headed out on our first day trip.

We started on the lake and had a choice of 4 or 8 km along the lake and we chose the longer route as we were up for a challenge! We found our skiing legs quite quickly so opted to do an extra 4km loop around the forest and it turned out I had a lot to learn when it came to hills. Jorma knows everything there is about cross country skiing and showed me I wasn’t leaning forward enough, it took a little while for my brain to cotton on as I fell down the majority of small hills I attempted. I only felt bad that I didn’t speak Finnish to express my gratitude properly for the countless times he kindly picked me up!

As with learning most outdoor activities of this kind, you’ll have a few bumps along the way as you learn to improve your technique and balance but it’s all part of the fun!

After a fun and challenging first day we returned to the guesthouse and were rewarded with some delicious pastries and then it was time for our first sauna! As a group you decide each evening who goes first, males or females, and the kind gentlemen on our tour let us go first each evening. Tonight’s sauna included a honey mask with birch and salt foot bath, it turns out honey stings a little when it gets in your eyes but it’s still rather tasty!

The next couple of days we explored local tracks, the first day adventuring into the forest and the second up to a local viewpoint, gradually improving our technique and gaining confidence. For me, hills were still a little challenging and not just going down them, uphill was also proving a little tricky but with Riika’s guidance, I was improving and with every new bump I learnt something new. Riika seemed to know when our energy needed topping up and often handed out some well-timed chocolate! On returning to the guesthouse, tasty goodies were waiting for us and we soothed our aches in a relaxing sauna each evening.

On our last night at the old school guesthouse, we ventured over the lake to a kota (traditional Lappish hut), where our glow-fried salmon for dinner had been cooked throughout the day and our smoke sauna awaited us. For the brave, there was also an ice pool for a much needed cool-off.

Wednesday started similarly to the others, by having a yummy breakfast, then packing a little lunch and topping up my thermos with some warmed blackcurrant juice, but today we had our longest distance of the tour to cover to the next guesthouse. A little nervous, I was reassured that it’s possible to stop at the midway point if I was struggling. The first goal was 14km to a local house where a very nice lady was waiting with hot drinks and cake. The guests on the standard version of the tour were doing the same route but in the opposite direction and we bumped into them here (luckily not literally) as they were leaving. After we had a short rest and replenished our fuel, we headed out for the final 11km through peaceful forests, negotiating the hills we approached (some more successfully than others), including our first encounter of a sign, highlighting a descent marked “!”, which I managed to fall over right next to before I had even attempted the hill! The sky blossomed into pink and orange as the sun was setting as I approached the welcomed sight of our guesthouse for the next couple of nights.

The next day we skied a local house track, including the above-mentioned dastardly hill but I managed to get past the sign and further down the hill before I predictably fell over, which I thought was an achievement! The tracks are made and maintained by the owners of the local guesthouses but everyone is welcome to use them but we barely saw another soul for our entire week so it felt like we had the world to ourselves.

On our final day skiing, we had another long journey to our third guesthouse of the tour (the first accommodation on the standard tours). I was a little sad that it was our last day and was enjoying our routine of working hard, skiing during the day, followed by sauna, delicious dinner and going to bed early with a happy, full tummy!

Whilst the distance was around 21km, the going was relatively easy and it was surprising to see how quickly we were covering the distance, plus we were feeling like pros at this point. Today we stopped in a kota to have our snacks around a fire to warm ourselves up. We were incredibly lucky with the weather and there was plenty of snow after the best winter season the Nordic countries have seen for a number of years. After we had defrosted, we headed out to finish our final leg of the journey. Even managed to fly down a huge hill without falling over! The next guesthouse has 5km of groomed trail that signalled we were getting closer to the end of our journey. Our final night was spent at a lovely guesthouse overlooking a lake and we were once again treated to a wonderful dinner, the local hostess is passionate about food and utilizes local ingredients from the nature.

Our journey was finally at an end and after saying a fond farewell to our guide Riika, the wonderful hostesses and the magical landscape, I travelled back to the airport with fond memories and armed full of inspiration to find my next skiing adventure and to experiment in the kitchen!