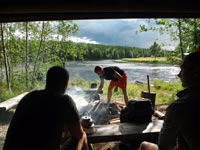 Which of our destination countries are part of the European Union, and which ones use the Euro as their currency?

These are questions we’re often asked by guests travelling with us for their outdoor adventures in Sweden, Norway and Finland…and the answers aren’t necessarily straightforward!

Here’s our guide to understanding EU membership (or not!) and use of the Euro (or not!) in Sweden, Norway and Finland.

Is Sweden in the EU?

Yes, Sweden is part of the European Union. Sweden joined the EU in 1995.

Does Sweden use the Euro?

No, Sweden has not adopted the Euro. A referendum was held in 2003 and the country voted to continue with its own currency, the Swedish Krona.

What currency does Sweden use?

The currency of Sweden is the Swedish Krona (plural Kronor) or Swedish Crown, written as SEK or Kr.

One Swedish Krona (Crown) is divided into 100 öre. However, since 2010, the smallest coin in circulation in Sweden is 1 SEK and prices are rounded to the nearest Krona.

Is Norway in the EU?

The EEA is made up of the EU member states plus Norway, Iceland and Lichtenstein. Membership of the EEA gives Norway access to the internal market on equal terms with EU countries.

Unlike Sweden and Finland, though, Norway is a member of NATO.

Does Norway use the Euro?

No. Norway is not a member of the EU and so would not be eligible to use the Euro.

What currency does Norway use?

The currency of Norway is the Norwegian Krone (plural Kroner) or Norwegian Crown, written as NOK or Kr.

One Norwegian Krone (Crown) is divided into 100 øre. However, since 2012, the smallest coin in circulation in Norway is 1 NOK.

Is Finland in the EU?

Does Finland use the Euro?

Yes, the currency of Finland is the Euro. Finland was one of the first countries to adopt the Euro, in 1999.

Before this, the currency of Finland was the Markka, or Finnish Mark. The Markka ceased to be legal tender in 2002.

How do you write numbers in Sweden, Norway and Finland?

When writing numbers, including amounts of money, Sweden, Norway and Finland, like many other countries, use a comma where other countries such as the UK would use a decimal point.

In the same way, where the UK uses a comma to separate thousands, Sweden, Norway and Finland use a space.

For more information on the destinations we offer, see About Our Destinations.