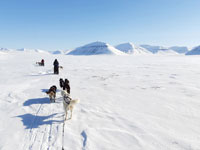 In the UK, by the time you get to March, the daffodils have been out for a while and we’re starting to dream about our next summer adventure.

But up in the far north of the Nordic countries in Sweden, Norway & Finland, the winter season is still going strong and it’s arguably the best time of year to visit!

You might think there are only snowy landscapes between December and February, but up north the snow lasts until around mid/late April – or even until early May for our very northern tours such as Arctic Wilderness Dog Sledding in Svalbard tours.

The Sámi, the indigenous people of the area, have eight seasons, and this period that combines the beautiful white scenery of winter under the blue skies of spring is called the “spring winter”.

But can you still see the northern lights?

Yes! There are still very good chances of seeing the Aurora when travelling up until early April.

The nights around this time are getting shorter, so you’ll need to stay up later, but the weather conditions are more settled so you’re more likely to have clear skies compared to earlier in the winter – so if there is a display, it won’t be hidden behind the clouds!

The northern lights will continue to shine throughout the year but you need it to be dark to see them dancing.

Isn’t the earlier part of the winter a good time to go too?

The midwinter period is also a lovely time of year to visit.

With its long hours of darkness lasting from around November to mid-January (depending on your location), it gives a magical blue quality to the light or beautiful pink shade when the sun is just trying to peek over the horizon.

When would a local go?

Christmas and New Year is a very popular time to travel and most of us from the UK would think of this as the best time for a winter activity, but the locals prefer to plan their winter adventures for between February and April. Weather conditions can of course vary at any time of year when this far north, but this adds to the adventure!

Some of our dogsled tours that are based in the mountains, such as Dog Sledding and Winter Camping on the King’s Trail, are only available from late February onwards. When sledding in the mountains, this increases the level of challenge, so you need longer hours of daylight and more predictable weather conditions to sled in these areas.

So if you’re planning a snowy break, why not consider travelling a little later in the season and get the best of both worlds of playing in the snow while the springy sun shines on your face!