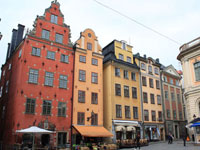 Sofia from Nature Travels shares her top tips for enjoying Sweden’s capital, the “Venice of the North”.

I grew up in a small town Waxholm (also spelt Vaxholm), a 45-minute bus ride from Stockholm, and have spent many days shopping, meeting friends and hanging out around the capital. These are my tips for what not to miss when spending a few days there.

The fact that Stockholm is built on 14 islands connected by 57 bridges makes a tour by boat something of a given. There are many sightseeing boats that will take you on a guided tour around the waterways of the city.

If you have some more time on your hands, it’s worth taking one of the archipelago boats and exploring some of the 30 000 islands that make up the Stockholm Archipelago. Strömma Kanal Bolag has different cruises in the archipelago.

Another option is to take a day tour to Waxholm (the town where I grew up). It’s an idyllic archipelago town with many well-preserved wooden houses from the turn of the last century, painted in the archipelago’s typical delicate pastel tones. Waxholm has numerous charming restaurants, cafés and shops.

Waxholm is easily accessible year-round, by Waxholmsbolagets boat traffic or by bus, If you take the bus, the trip is covered by Stockholm’s public transport service and so is also included in the Stockholm Card. Why not take the boat one way and then the bus back?

Another thing to do in Stockholm is to visit the green island of Djurgården. It is beloved by both Stockholmers and tourists. Djurgården is a calm oasis. There are fine areas to stroll in and to have a picnic. Djurgården is also home to several of the city’s top museums and attractions (including Skansen and the Wasa museum described below), as well as enjoyable cafés and restaurants.

As an open-air zoo and museum, it’s probably most enjoyable in summertime, but is open for visitors all year around and in early December the site’s central square is host to a popular Christmas market.

The Vasa Museum is a maritime museum located on the island of Djurgården. The museum displays an almost fully intact 17th century ship, the 64-gun warship Vasa, that sank on her maiden voyage in 1628. The showpiece is the ship itself, which is simply magnificent. To look up, or down, at a ship that is almost 400 years old and is essentially in its original state is a fantastic experience.

Södermalm is the old working class area of the city, which has turned bohemian chic. Södermalm has a lot of cafés, restaurants, bars and rows of boutiques with a mix of vintage, independent labels, and Swedish mainstream designers.

The vibe in the streets of Södermalm is relaxed, creative and trendy, especially in the Sofo area (South of Folkungatan). SoFo is a play on the acronym SoHo (South of Houston Street, in Manhattan).

In the warm months, Nytorget Square is a bustling social scene. The last Thursday of every month is called SoFo night, where retailers are open until 9pm and offer free entertainment and refreshments to shoppers.

Gamla Stan, the Old Town, is one of the largest and best-preserved medieval city centres in Europe, and one of the foremost attractions in Stockholm.

All of Gamla Stan is like a living pedestrian-friendly museum, full of sights, attractions, restaurants, cafés, bars and places to shop. The narrow, winding cobblestone streets, with their buildings in so many different shades of gold, give Gamla Stan its unique character. Even now, cellar vaults and frescoes from the Middle Ages can be found behind the visible facades, and on snowy winter days the district feels like something from a storybook.

Västerlånggatan and Österlånggatan are the district’s main streets. In the middle of Gamla Stan is Stortorget, the oldest square in Stockholm.

The City area of Stockholm is where the big department stores are and a lazy shopper’s paradise. Sergels Torg is a sunken pedestrian plaza with a triangular pattern (colloquially referred to as Plattan, “The Slab”) and a wide flight of stairs leading up to the pedestrian street, Drottninggatan. Drottninggatan (“Queen Street”) is a major pedestrian street. The majority of the street is car-free and lined-up with numerous stores and shops.

Kungsträdgården (Swedish for “King’s Garden”) is a square/park in central Stockholm. It is colloquially known as Kungsan. The park’s central location and its outdoor cafés makes it one of the most popular hangouts and meeting places in Stockholm. It also hosts open-air concerts and events in summer, while offering an ice rink during winters.

I think that covers it! Those are my my tips – writing this makes me want to go strolling around the streets of Stockholm – hmm, I think a trip to Stockholm might be on the cards for me this spring!

We offer a range of outdoor activities close to Stockholm, from sea kayaking to multi-activity adventures.