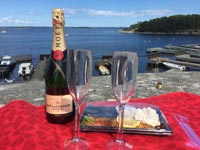 This article discusses Systembolaget, the Swedish national off-licence, and the sale of alcohol in Sweden. With some variations, a similar system also operates in Norway (where the state off-licence is called Monopol) and in Finland (where it is Alko). Sweden allows beer up to 3.5% to be sold in supermarkets or other stores, while in Norway the limit is 4.7% and in Finland has recently been raised to 5.5%.

Relaxing with a cold beer or glass or wine after a hard day’s paddling on one of our self-guided canoe tours in Värmland or hiking tours in the mountains of Lapland is one of life’s little pleasures. But you may find it harder than you think! In this series of FAQs, we look at some of the questions most frequently asked by our guests regarding Systembolaget – the Swedish national chain of off-licences.

Where can I buy alcohol in Sweden?

Systembolaget is a nationwide, government-owned chain of off-licences in Sweden. Systembolaget stores are the only places in Sweden apart from bars, restaurants and night-clubs where strong alcoholic beverages can be purchased.

When was Systembolaget introduced?

In the second half of the 18th century, following a series of unsuccessful attempts to regulate the consumption of alcohol in Sweden, all restrictions were removed by the king. This led to a rapid increase in the consumption and home production of alcohol. In 1830, the first society for moderation in drinking was started in Stockholm, and in 1850 alcohol first began to be regulated by the state. During and following the First World War, strict rationing was in place with the quantities of alcohol which could be purchased limited. This was abolished in 1955 when Systembolaget stores were introduced. In 1965 private stores were permitted to sell beer up to 4.5% abv, but this was reduced to 3.5% in 1977 following a dramatic rise in beer consumption.

Does Systembolaget have a monopoly?

Yes. In June 2007 an EU panel of judges ruled that Systembolaget’s shop monopoly was justified, though did lift restrictions on the private import of alcohol.

Why is Systembolaget allowed to be only chain of off-licences in Sweden?

A number of regulations govern how Systembolaget stores are operated. One major reason for the monopoly being permitted is to enforce the minimum age law. Also, Systembolaget stores are prohibited from favouring particular brands, which in theory leads to a fairer choice for the consumer. Systembolaget can promote itself, but not individual products. All products are taxed on alcohol content rather than price, and all are sold with the same profit margin. Another advantage sometimes cited is that the enormous bulk buying power of the Systembolaget chain helps to keep prices down – Systembolaget is one of the largest buyers of wines and spirits in the world. Staff are well-trained and often surprisingly knowledgeable about the products on sale.

When are Systembolaget shops open?

Opening hours have been extended in some places in recent years. In larger centres, Systembolaget stores may be open Monday-Saturday, perhaps until 7pm on weekdays and 3pm on Saturdays. In smaller towns, opening hours may be restricted to weekdays and/or office hours only. In remote areas and small villages, the local store often operates as an extension of Systembolaget, where orders can be placed in advance for collection on particular days of the week

How do I buy alchohol in Systembolaget?

In some stores you can choose products off the shelf yourself as you would at the supermarket to pay at the till. In other stores, available example products are displayed behind glass cabinets. You write down the codes of the products you would like to purchase, take your order to the cash point and the assistant will fetch your items from the stores.

What is the legal age to buy alcohol in Sweden?

Yes, but only beer up to Klass II or “folköl” (“people’s beer”), max. strength 3.5% abv. Stronger beers and other alcoholic beverages must be bought at Systembolaget.

Is alcohol in Sweden expensive?

It can be, especially when buying alcohol in bars or restaurants, but not always. Sweden certainly has a reputation for high prices for alcohol. In general, prices for beer, wine and spirits in Swedish bars and restaurants are likely to be higher than in the UK.

However, Systembolaget has a very wide selection to suit a range of tastes and budgets. While the very lowest-price options for alcohol commonly found in the UK or elsewhere are not available in Sweden, prices for a box of wine (often the most economical way to purchase wine) start at around 240 SEK (about £21) for a 3-litre box, equivalent to around 4 bottles or aprox. £5/bottle.

As Systembolaget is very much focused on promoting responsible alcohol consumption and on quality, you won’t find multi-buy or discounted alcohol offers as you would commonly find in the UK.

Nevertheless, as drinks are taxed on alcohol content rather than price, some products can be quite competitively priced relative to the international market.

Light beers (up to 3.5% abv) are sold in supermarkets and are usually very affordably priced.

Does Systembolaget offer a good selection of alcoholic beverages?

Yes. The Systembolaget staff are typically very knowledgeable about the products they sell and can, for example, advise on which wines may best complement particular foods and recommend wines which are vegan-friendly or organic.

Can I recycle cans and bottles in Sweden?

Yes. The price for all beer and other drinks cans includes “pant” or deposit, which will be refunded if you return the empty cans to a recycling station. Most supermarkets have a station outside the store, where you feed in your cans and then get a receipt which you can take to the till to exchange for cash or use as a discount on purchases. Don’t squash the cans! The machines will only accept them if they are intact. The same system also applies to plastic PET bottles.

The Systembolaget monopoly and restricted opening hours can seem strange to visitors from overseas, but in many ways the system functions very well. Provided you plan ahead and check local opening times, there is no reason why you should not be able to enjoy a glass of wine or cold beer after a day of outdoor activities in Sweden!