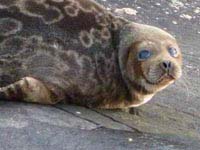 Saimaa Ringed Seals are found only in Lake Saimaa in Finland and are one of the world’s rarest seals. There are thought to be just 360 individuals remaining today.

They are one of a number of subspecies of Ringed Seal, except that, unlike many other species of seal, they live in fresh water. These seals became separated from other populations of ringed seal after the ice age – when the ice melted and the land rose the seals were left behind in what became Lake Saimaa and over time they evolved into a separate subspecies.

What are the main threats facing the Saimaa Ringed Seal?

The main threats facing these rare animals are unfortunately all man-made.

Previously seals were hunted as they were considered a threat to the fishermen’s livelihood. Fortunately the practice of hunting the seals no longer happens, however, fishing still poses a threat to the seals as they can get caught in fishing nets and drown. Even the “safer” fish traps can cause pups to drown, who inadvertently swim into them and get stuck.

Increasing human activity on the shores of Lake Saimaa can disturb the seals and during the winter when the mothers are in their lairs with their pups, if they are disturbed the mother and pup will sometimes jump into the water and the pup can freeze. With increasing numbers of cabins being built near the lake, the areas which are suitable for nesting sites are reduced.

What is being done to help the Saimaa Ringed Seal?

Fishing restrictions have been put in place which ban the use of fishing nets between April and June in parts of the lake and special stoppers can be used in the fish traps. These still allow the fish in but stop the pups from getting into the traps.

Whilst human activity can disturb the seals, if there were no tourism in the areas then there would not be enough money coming into the area to support the national parks and therefore to support the protection of the seals. With sustainable and eco friendly tourism, visitors can enjoy the beautiful surroundings of Lake Saimaa and the seals whilst creating minimal impact on the seals and providing vital money for the seal protection projects.

Nature Travels offers the possibility to Canoe or Kayak Linnansaari National Park, a wonderful way to explore this beautiful area.