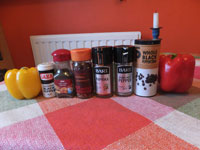 Speaking a foreign language is always going to be fraught with potential confusion and embarrassment. Years ago when I first met my wife and tried to express my love in my fledgling Swedish, my attempt to say, “You are the thunder in my heart” (we were watching a lightning storm at the time – rather a good line, I thought) came out as, “You are the thunder in my bum”.

And when it comes to English-Swedish mistranslations, the kitchen is a minefield, particularly when trying to unravel the difference (or not) between pepper, paprika and chilli.

To avoid culinary catastrophe on your next holiday in Sweden, here’s our guide to untangling the mess:

The English word “pepper” (the spice) is the Swedish “svartpeppar” (black pepper) or “vitpeppar” (white pepper).

So far so good.

The English word “paprika” (the spice) is also called “paprika” in Swedish but is normally referred to as “paprikapulver” (paprika powder) or “paprikakrydda” (paprika spice).

As if that wasn’t bad enough, the English “chilli” describing a dish (as in “vegetable chilli”) is also “chili” in Swedish, but…..

…… the English “chillies” (the spicy fruits) can be translated as either “chili” or “peppar”!

Phew! No wonder the British eat so much fish and chips – English “salt” is Swedish “salt”. Simple…

As a final aside, I would like to share my favourite Swedish food word: the Swedish word for “strawberries” is “jordgubbar”, which translates as “old earth men”.